Kindly check her light floating voice here and her personal tumblr here. I believe that she should has more listener to her beautiful voice, because it just magically gives you both blue yet warm feeling at a time, it can’t easily describe actually. And she’s doing it perfectly with acoustic guitar.. ^^
The movie and the singer need more audiences, so just watch and listen to it soon.. 🙂 Goodbam, then..
Disclaimer : I’m just trying to analyze the whole concept story from lyric and also the MV setting. It based on my own opinion, so it can be not fit with the real meaning. So, enjoy.
This song itself, tell us about how they meet their dream girl that only appear on their dreams, and disappear on reality. To deliver the story, the MV has 5 settings with each different duty:
A. Trapezoidal black room with white lamps
B. Pink and baby blue rooms with the big frame that keep the dream girl inside
C. Baby green room with bed and alarm clock 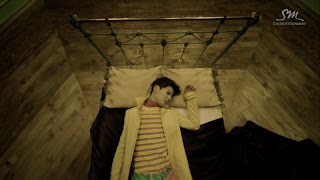 E. Trapezoidal baby green room with windows and wall lamps
What I get from those settings:
1. Main Stage
All trapezoidal rooms are their place to dance and sing > room A and E. Another room is where the story take place.

3. Dream
On the contrary, the colorful room symbolized their dream > room B. They just dream about this girl, that’s why the room only contain one thing. A big frame, with dream girl inside.

4. Transition
And I guess the room C is the transition between both, where they don’t sleep nor really wake up. The alarm clock is the symbol of the transition. When the clock start ringing, the girl disappear.

What happen when they fell into the dream :

The transition is the window. Onew consciously went to his dream by window, with his own eagerness, although arrived in the dream in sleeping condition.

Taemin Version
Both Jonghyun and Taemin version use trampoline as the transition. Without any resistance, they were pulled by trampoline then wake up later on the dream.
This is what happen when reality ask them to come back :

Key Version
Key in reality use speaker to wake up Key in dream. The transition is speaker that sounds like alarm clock in his dream.

Minho Version
Minho in reality use a red thread to take Minho in dream come back to his real life. Both Key and Minho seems not really want to back. Their dream is more colorful than the reality itself.
The last, I figured out that they started the MV in a black room then ended it in colorful one. 🙂 That’s all. Please leave a comment if you have another idea about this MV concept. To see the MV, video with hangul+romanization+eng sub, and lyric please kindly click the link. Thank you.

Series of Words, Bunch of Ideas, Spread Blessings to Others

Here at last, we shall be free.

The journal of Iain S. Thomas.

"All grown-ups were once children... but only few of them remember it.” ― Antoine de Saint-Exupéry